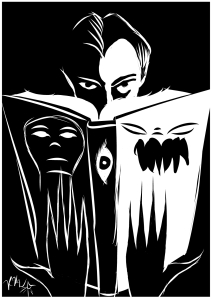 where is the darkness seated: in the book or in the reader?

Frankenstein! Dracula! Jekyll & Hyde! These names are to our culture as common and well-known as Cinderella and Sleeping Beauty. Even if you haven’t seen the movies, either the classic black and white films or the newer remakes, even if you haven’t read the books, almost everyone knows the essential stories. Anyone can recognize the favorite costumes, tricks and treats at Halloween marked with the famous images. There are still more villains and creature characters familiar to those who are fans of the genre: the Invisible Man, the Morlocks from The Time Machine, Dr. Moreau, the Phantom of the Opera, Dorian Grey, Faust, and the countless hauntings of houses and other venues that drive the protagonists mad.

Other famously classic movie monsters are the Wolf Man and the Mummy. Up until I did some research for this blog entry, I was not aware that there were any gothic or early era books about werewolves or mummies. As early as medieval times, we have Bisclavaret, about a nobleman who is betrayed and trapped in his wolf form (which is currently being worked up as a webcomic by Kel McDonald of Sorcery 101 by the way!), and then there are several short stories, one Lot No. 249 by Arthur Conan Doyle, another the Jewel of Seven Stars by Bram Stoker, about or related to mummies. There’s also a satirical short by Edgar Allen Poe titled Some Words with a Mummy. Jane Loudon’s The Mummy! also seems to be more humor than horror, but it is also set in the 22nd century, and I think I’m going to have to dig that one out of a library somewhere and add it to the collection in my head.

Of course there are also witches, but I won’t bother to seek examples of these. No one story stands out to my mind, and gothic horror is chock full of characters either dabbling in or mastering the arts of evil magic by various means. (The most common image of “witch” that comes to all of our minds is not in fact from a horror story, but a children’s novel about a young girl and her dog swept up by a tornado and deposited in a fantasy world.)

What is it about these stories that keeps us coming back for more? More movies, more spin-off books, more graphic novels and other media, clever t-shirt designs, costumes and cookie-cutter shapes? Public domain alone is not enough, otherwise there’d be hundreds of other gothic novel adaptations on our shelves.

I have read a few of the books, mainly those associated with vampires (how could I resist?), and other characters of interest (I adore the Phantom musical, which I may write on specifically next week; and Stuart Townsend as Dorian Grey in League of Extraordinary Gentlemen caught my eye), or those I was assigned to read in school. As a reader and a writer, I can’t say that most of them have great writing. Of course, that’s a product of the time. The gothic novel was not the carefully streamlined thriller of today. Many of the stories do not have positive, uplifting endings like much popular fantasy that I personally prefer. But I will say the stories, or rather I think, the idea behind each story, are what continue to intrigue all of us as time wears on.

There are many aspects of each idea that can be interpreted. On the one hand there is the sheer bone-chilling fear of inhuman or half-human creatures that creep up on us in the night and steal not only our lives, but sometimes our souls, or they can manipulate us to their own gain. Often it is not the creatures that are the villain, but those who create them, mad scientists or obsessed Egyptologists seeking to take their ideals far beyond the reach of ethics.

But to me the interest is rooted more in the deeper aspect. These creatures and madmen can be mirrors for ourselves, and not just to see our own evils. More and more the newer interpretations of these characters and archetypes are imbued by the authors with something sympathetic, something that breathes life into them in unexpected ways. We find ourselves watching these old familiar plays and we see the world not from the point of view of the victims, but that of the monster. We almost feel, in some part of our mind that we won’t admit to (most of us), that we want the monster to win.

In Coppola’s ’92 Dracula, our villain regains his youth to become a long-haired prince, longing for his lost love, and finding in Mina her reincarnation, and Mina is more willing to love him, not so hypnotized as in the earlier portrayals. In Mary Reilly we see the personal life and behind-the-scenes setting of the Jekyll household and we hear the seductive, persuasive words of Malkovich’s wonderful portrayal of Hyde. Malkovich and Oldman normally are not of interest to me sexually, but in these roles they stand so close to my Dark Prince archetype, that I feel mesmerized in spite of myself. And even in creatures that remain the unquestionable villains, we see some new aspects. In the ’02 Time Machine, we are introduced to the Ubermorlock, making the previously unapproachable creatures into a less animalistic, more intelligent and far more sinister force.

I believe these modern, empathetic interpretations are an attempt to reach that deeper aspect we sense, and have always sensed, in these ideas. They are a call to the inner Darkness that draws fans of the genre back again and again, hungering for more as a vampire needs blood to feed it body and soul.

Note: I haven’t included zombies in this. For one thing the well known parts of the zombie genre are a much later development, centered mostly in movies, I think. Feel free to comment if you have information I didn’t find in my quick search. Lovecraft wrote some zombie tales in the 1920’s. In 1932 there was White Zombie, a silent film with Bela Lugosi. I Am Legend, which inspired three different movies, none of which were about common zombies, was written in 1954. Besides, call me snobbish again, but I don’t feel like zombies hold quite the same place as the other monsters, as they are generally shambling, mindless things. Frighteningly unstoppable, and gruesome in the thought of becoming one, but basically not very deep. I did enjoy Shaun of the Dead tho’, mostly ’cause it makes fun of the genre.

I am a writer/illustrator of various types of speculative fiction but mostly modern fantasy. I have loved magic, and the people and creatures who live with it and use it, all my life, and writing and drawing these people in modern environments makes it all the more real to me. I also like to add an element of Darkness and horror, as well as science fiction, for “flavor”. I am fascinated with everything from unicorns and dragons to vampires and demons.

This site uses Akismet to reduce spam. Learn how your comment data is processed.

Who does this chick think she is?
Find Me Elsewhere
Contribute

Paypal One-Time Donation – or – Become a patron on Patreon!

Patreon is a service to provide funding for creators of all kinds. Donations for my blogs and creations are (currently) a per-project basis. Be sure to browse and find your favorite creators so you can not only send recurring funds, but keep in touch and get exclusive insights and incentives.

Why, you may ask, am I asking for donations? Please consider that I spend hours wording my posts and creating original artwork to enhance their meaning. If you’ve enjoyed and hopefully felt enlightened (or endarkened?) by what you’ve read, and if you’d like to see more articles, I would truly appreciate your funds and your energy. Also, I would like to produce some books in the future, both of these kinds of articles and fiction stories, and your funding would help this immensely.

Please note, I wish I did not have to say this as I think it should be obvious, but all images and writing are copyrighted to me, Rachel H. White, and no one has my permission to reuse them for any purpose. All illustrations on this blog are my original work. If you would like a print copy for display with credit to me, I’d be overjoyed to provide, but they are not for re-use.